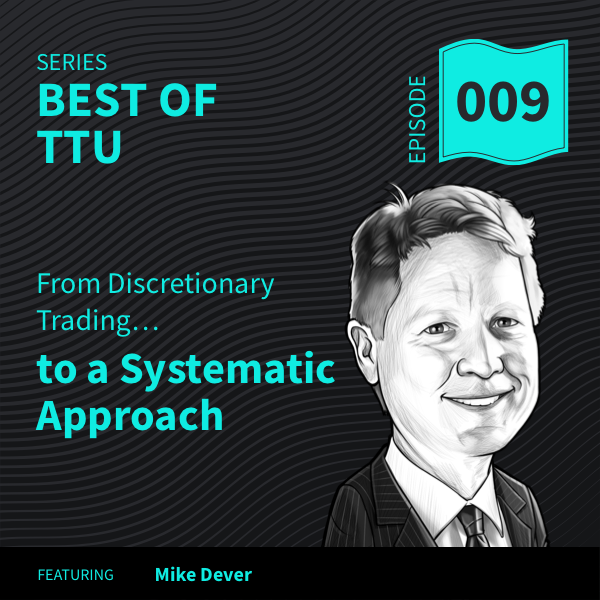 Best of TTU - From Discretionary Trading to a Systematic Approach

At the very beginning of my podcasting career, I had a great conversation with Mike Dever covering many trading related topics, one of which were the different approaches to trading. And there was One segment I really liked in particular, and which I would like to share with you today.  It was a segment where Mike shared his own systematic approach to trading and as you listen to it, we need to keep in mind that Mike was not always a systematic trader.

If you would like to listen to the full conversation just go to Top Traders Unplugged Episode 3 and Episode 4.

From Discretionary Trading to a Systematic Approach

Niels: And the Benchmark program, was that systematic and completely without discretion? Or did you keep sort of your discretionary trading in there?

Mike: No, we didn't. It was fully systematic. But what we did was look at a lot of types of trading that I did through the '80s and try to capture that in a systematic fashion. So, for example, we had a number of strategies that were based on market reaction to news events or reports. Because I traded a lot of that type of event reaction in my discretionary trading.

So, we systematized the approach, captured it in the best way we possibly could and included that in the Benchmark program. So, there were a number of strategies in Benchmark that were based on sort of that intuitive or discretionary feel.

We had a number of strategies that were based on market reaction to news events or reports.

But instead of relying on the black box of the brain to interpret everything correctly each day, it followed a rigid set of rules to be able to repeat the process every time it reoccurred.

Niels: And so, in that sense, just to be clear, were you convinced, even at that time early on, that if you were going to be successful from an investment management point of view, you had to be systematic? Was that something that just was obvious at that time? Or was it more of an operational issue where you say "Okay, it's actually easier if I can do it systematically."

Because the systematic side of things is partly, I think, an operational issue, but it's also an emotional issue, in my opinion.

Mike: Absolutely. The one thing you get from systematic...the one main thing I think would benefit the majority of traders out there is the discipline that it brings to the trading. You can sit there and say as much as you want as a discretionary trader "I'm going to cut my losses at these levels, I've got a bad trade, I'm going to get out when it does this."

But not everybody does that. And you may do that for a while, but at some point, there's that constant battle where you're sitting there saying "But it's a great position. I've got a great position."

And I've been reading some books about the financial crisis. And one the things that you see there that's the same as what you had with long-term capital, is just that utter breakdown in risk management discipline. And it's easy for a person to sit and rationalize why "You know what? The risk management wasn't designed for this scenario." Or "This was a great trade 10% loss ago. It's even better now." So, I'm certainly not going to get out of it today and just ride it into the ground. So, the one thing, if there's nothing else that you get from systematic trading, is the disciplined risk management approach to trading.

Related to risk management comes draw downs. I'd love to know how you or whether you do predict in your testing and analysis a level of expected draw down for the way the portfolio operates. Is that how you come up with the overall balance to say, "We're happy to do this, because we expect it to have," as you say, "a certain level of return, a certain level of standard deviation?" I don't know whether you relate that standard deviation to draw downs as well or how you look at that.

Mike: Yeah, so I consider drawdowns a true measure of portfolio risk. Volatility. You can look at 100 specific examples where volatility is meaningless. Certainly an option writing strategy that has no volatility to it does not mean it has no risk to it.

Conversely, one of the examples I give in the book was a strategy based on a time-price series that had pretty enormous volatility in it. It was over the course of a year...I forget what the actual volatility number was. I think it was in the 30-40% range of daily price activity. But it was an extra super safe strategy and highly predictable.

All I was showing was the average mean temperature in Philadelphia on each day of the year. It's something that cyclically pretty much, if you bet in the winter that it was going to go up between then and the summer, you were going to make money, but there was a high level of volatility during that period. There's a number of instances where volatility is meaningless as a measure of risk.

Where volatility and draw down break down in the relationship is where you don't have a balanced truly diversified portfolio. You're just doing one strategy or a sector of markets. Then the volatility that you're looking at is virtually meaningless. To me, Sharpe ratio is an absolutely meaningless measure on its own.  It doesn't give you any idea of predictability of returns.

Niels: I couldn't agree more. In fact, over the years we looked at hundreds of CTA track records. What we found as a rule of thumb is that you should expect a maximum draw down for any manager of roughly five times their monthly deviation. If you have someone who is on a 5% monthly standard deviation, you should expect them to lose 25% at some point. As a rule of thumb, that's not too far off.

Mike: I think it's pretty close. If you have the less diversified their portfolio and strategies and markets, the bigger that draw down is going to be relevant to that standard deviation.

It's no different when we're making money or when we're losing money.

Mike: It's no different when we're making money or when we're losing money. I don't have anything in my track record that shows I will not incur draw down. It's a natural process. It's just part of our program. For example, last summer, in mid-2013, we were in what I was referring to people as a perfect draw down. On an intraday basis, it was 8%. On a month end basis, about 7.5%. Peak the trough, which was at that point in our trading exactly where we should have had maximum draw down. It was a little delayed. It might have should have happened half a year or so sooner by then, so the probability was getting out there.

What we sent out in our monthly report, "Notice that hey, this is a perfect draw down. If you want to invest now, it's a great time to do that." I'm not advocating timing, because if you happen to have the draw down, great. Take advantage of it. But you don't want to wait for a draw down, because you give up the positive return expectancy you achieve on a month to month basis. At that time it was just a perfect draw down. I guess react one way or another to it. It's just what it is. It's what it should be. I accept that as well as I accept the positive period.

Niels: Yeah. No, no. It's a perfect response, but I guess so few people out there on the investment allocator side will see it the same way as we on the manager side do.

Mike: It's funny, because they'll look at the back testing and the track record, the actual track record, and they'll see there's an 8% draw down. But then when you have it, they question it like there's something wrong. No, it's exactly what it's supposed to be. Nothing different. 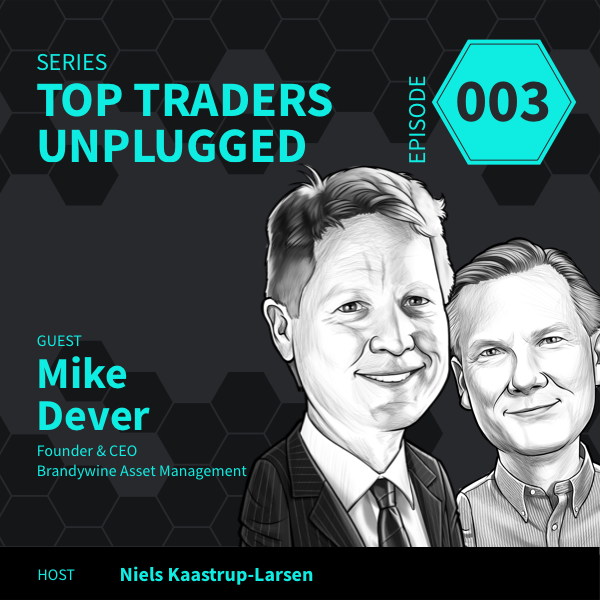 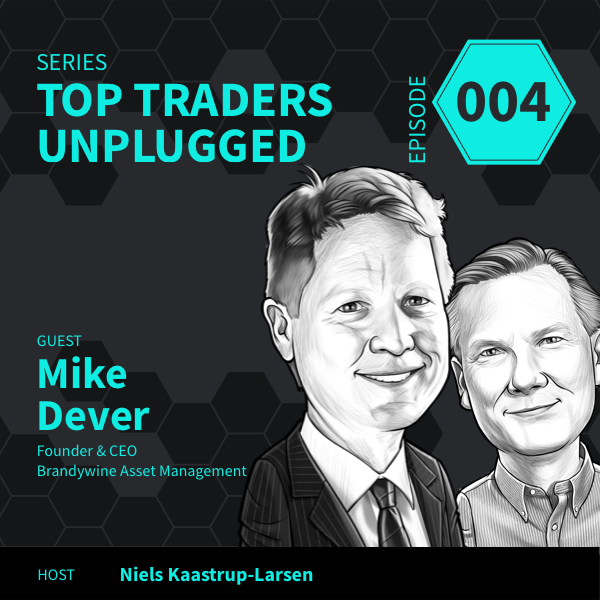