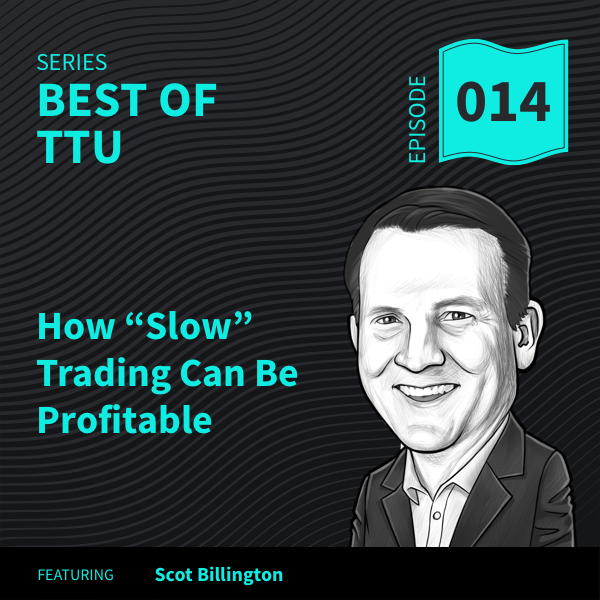 Best of TTU - How ''Slow'' Trading Can Be Profitable

Would you believe somebody if they told you they had been very successful in the investment world, by looking at the just markets once a week? Everything, and everyone, seems to be getting increasingly more short-term in their nature, so it seems counter-intuitive that you can run an actively managed trading strategy by only checking for new signals once a week. Nevertheless, this is exactly what Scot Billington and his partners have done. When I spoke to Scot a while back, he shared some great stories and real-life experiences, that had led him and his partners to this realization, and ultimately, their unique way of implementing a Trend Following approach. I’m excited to share some of these key takeaways with you today.

If you would like to listen to the full conversation, just go to Top Traders Unplugged Episode 25, and also Episode 26.

Will Trend Following work forever?  Is there a risk that the Markets can fundamentally change?

Niels:  It's a slightly different topic than where we started, but I think it's an important one, so I'd like to explore it a little bit. Although you probably know that my bias is also that I think trend following is a highly robust and sustainable strategy. If I was going to take the opposite side of the discussion here, and that is because we obviously hear the argument every time that people say, oh trend following is dead and out comes the veterans of the industry saying, yeah, we've heard this before, and it never comes true, but we also know that decompression or compression of volatility is not great for trend followers and we have to admit, maybe with you as one of the exceptions, but we have to admit that some of the people who have been around for 20 or 30 years have significantly larger drawdowns in the past few years than they have seen in their 30 year career. Some of them have even folded and stopped because they thought it was getting too difficult. The question is, of course, can one always argue and say yeah, sure it's going to come back, it's going to be fine, or is there as you alluded to before, is there always the risk that the markets, or that something has actually fundamentally changed? I'm not saying I'm a strong believer here, I'm just saying..

Scot:  In the midst of any drawdown, that will always be a great and valid question, and I always start by saying look, I don't know the future. I can make my best guess. I can argue vehemently that my guess is very rational, but just because something has worked doesn't mean that it will work forever across any board. We would be out of business long before there was enough physical evidence to suggest that trend following didn't work. If you took the position today that trend following doesn't work, that would be an extraordinarily irrational statement because the empirical evidence before you strongly suggests that it does.

Niels:  Yet a lot of investors take that stand.

Scot:  Of course, they do, but they bought tons of collateralized debt obligations, right?

Scot:  I mean hundreds of trillions of dollars of them. They ran models that didn't even have an assumption possibility of a real estate price going down. Again it's easy to pick on things in retrospect, but we also bought lots of Enron stock, didn't we?

Your largest drawdown is always in front of you… but there will also always be a winning period better than we've ever seen.

Niels:  But if we talk about evidence and I think we both agree that certain market environments are not good for trend following and certainly compression of volatility is one of them.

Scot:  In our stuff volatility is bad. You want volatility post-trade entry, not pre. So volatility pre-trade entry is bad. Ultimately, volatility tends to increase as a trend increases, so I think people have, for years, (now I have not studied this so this is a hypothesis of mine)... it's like lightning makes my driveway wet, because every time I see lightning my driveway is wet. I think that when silver gets to $50 volatility goes up a lot. But the trend follower has made money because silver got to $50, not because volatility went up, so it's a correlation rather than a causation. The best trends, the ones where you make the most, smoothest money are the period right before it goes crazy, when it just goes up a little bit every single week. Nobody really talks about it for a while and here it goes and goes, I think it's a perfect example. I don't think volatility compression...now if you mean volatility meaning the high-end crude oil over the last two years is $104, and the low is $89, yes, that's not very good that's a choppy sideways market.

Niels:  It's price range compression I guess I'm referring to.

Scot:  Sure, if there aren't big trends, then trend followers aren't going to do well. That would be very difficult to argue against, but I would say this is, what people forget is, your largest drawdown is always in front of you, except you're going to retire or die at some point. Let's say that my grandkids went on to trade our method, there will be a far larger drawdown between now and my great grandkids trading my model than I've seen in my model up to now, because it's more time - more instances. Now there will also be a winning period better than we've seen, so the idea that when someone is having their largest drawdown than they have ever had, therefore, this doesn't work, well did it not work when they had their last largest drawdown? Why did we think they were never going to have a drawdown larger than their previous largest? My returns are going to be distributed...and in any trading the variance is so much larger than the drift. You have to remember that like 2.5% of the time I'm going to be 3 deviations to the bad. That's terrible performance.

I think there are so many things here. The first is that trend following gets held to a standard. If the stock market got held to that standard, the S&P wouldn't exist. I'll just take us, for example; we made equity highs in May of 2013. We're probably 15% off that high, and the question comes up - does what you do work anymore?  We make our money through the fat tail distribution of price moves, and there's a slight dependency in price moves - all trend followers we would argue do. That evidence is evidenced across all markets. We trade Yen the same way we trade cotton and cocoa across decades of time. I think AQR did a study that went back hundreds of years, and it suggested that trend following would have worked. There are definitely anecdotal examples. I can't imagine that trend following in civil war cotton wouldn't have been pretty good. Certainly the South Sea bubble and things like that.

So there's reasonable...this idea of large outlier moves, the fat tail distribution of price moves is academically verified as anything that could possibly be. That doesn't mean that it has to happen in the future. So you've got this massive body of evidence.

Furthermore, if you think about is scientifically, if you did a chemistry experiment, and you said hey, A plus B equals C, the big thing to prove in your experiment would be could your peers run the same experiment and get the same results. So now think about trend following, it has been almost without question the most repeatable method of trading probably every invented, not only through all of the turtles, but guys like me, I was "most of these people are trend followers, let's try that". We think that whatever it is that made all that work ended May 31, of 2013 - really... that was the day?

Niels:  It's a very, very interesting discussion, isn't it, because you and I agree on the answer to that, yet most of the world doesn't.

Scot:  Obviously anybody can disagree with what they want, but what is your basis, what is your logical reasoning for that change that day. So I would simply say here is the monthly variance of my returns, our performance, we're not even 2 deviations to the bad. In fact, it's shocking that we haven't had a worst period to be honest with you. CTAs and trend following; they're really the ugly red headed step children of the financial world. All of the Markowitz and all those guys and their bull about efficient markets and all this, the idea that I could slap a couple of moving averages on a chart and make money it's abhorrent to them.  They would want to vomit. It's really the case. I may not make enough for the risks, but I can turn a profit. Furthermore, they're not even that massive. You're talking about being down...I think we lost 2% last year. We spent 3.5% in transaction costs. That doesn't do a lot for our client. We hope to do better, but if your idea is that I'm going to invest in trend following, I'm never going to lose more than 10% in a year, you need to find something else. That's not for you.  I'd even go as far to say; you need to stay away from to the market passive investment. The reason that you may have had this small business that has made a bunch of money was because no one was in your front yard with an offer for your business every day, so you didn't see the fluctuations that actually occurred. The same with houses. Warren Buffet gets to have 50% drawdowns apparently twice a decade, and he gets quoted, and I'm not saying he isn't a marvelous investor, whatever, what I'm saying is we get held to this standard that it doesn't seem equal. 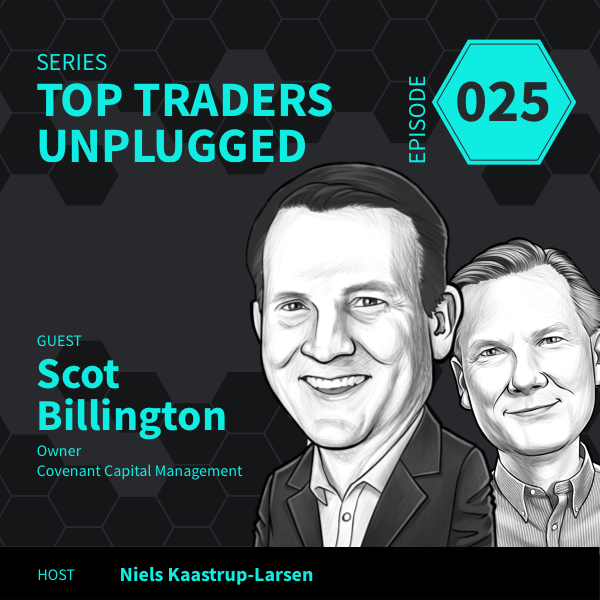 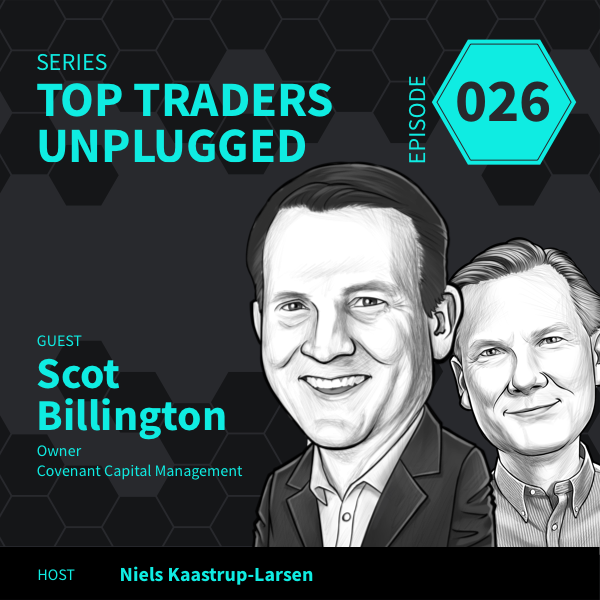