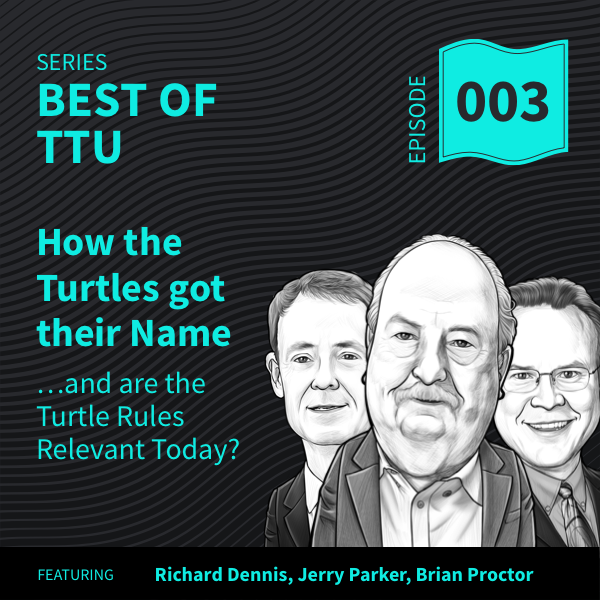 Best of TTU - How the Turtles got their Name... and are the Turtle Rules Relevant Today?

Today I would like to share some really great and unique takeaways from  a conversation I had with the one and only Richard Dennis, the father of the Turtle Project from back in the 1980’s as well as two of his turtles, namely Brian Proctor and Jerry Parker.  In our conversation we put the record straight for the first time on a number of myths about the Turtle experiment including How the Turtles got their name, and if the original rules that were applied with great success 30+ years ago would still be relevant today, and also how long it took Jerry and Brian to make sense of them.  So let’s get straight to it, starting off with the very beginning of The Turtle story.  If you want to catch the full episode then just go  click here

How The Turtle Got Its Name

Niels: Now there has, over the last three decades, been so much talk about how this trading experiment was named: what the inspiration for the Turtle name really was. Some people say that it was related to you seeing a turtle farm in Singapore I think I heard, and another story I heard was it was related to a rock band called The Turtles that performed back then. Why don't you put us all out of suspense and share with us the true story about how the name came about.

Richard:  I'm going to stick with the first story about the turtles in Singapore. That actually, that's how they got the name, it was kind of a misnomer but it sort of stuck. If I had a dollar for every plastic turtle that people have given me, I'd be indeed rich.

Niels: But also, talking about the name itself, and I wonder whether seeing the turtles in Singapore or something that happened years before you did the program, but I also wanted to talk about the inspiration for the idea behind creating the Turtle Program. Again, we hear so many stories relating to, one that seems to be very popular is that you and your partner back then, Bill Eckhardt, having seen the movie Trading Places with Dan Aykroyd and Eddie Murphy, where there was a bet made about how you could train anyone to be successful in trading.

Richard:  That you're going to get a "Heavens NO!" on that one.

Niels: Oh well good! Excellent, excellent! Well, can you share with us how the whole idea behind the Turtle Program came about?

Richard:  Sure, so one lazy Sunday afternoon I was hanging out with Johnny Walker Black, and I started to think about my own trading and realized that a lot of it was just sort of rules that were informal and that I noticed that other traders operated according to rules. Also, some of those rules were very bad, like a lot of traders at that time, their one rule was always buy soy beans.

Having thought about my trading and the rules, it seemed to me that, at that time, just to put a number on it, I thought that two-thirds of trading was following rules and maybe one-third was intuition - the dreaded flare that we talked about during the course and that. So, as the ice cubes melted, I started to make some notes about what I thought was true; what you could do to prove it. It could turn out to be one of those endless debates that never comes to any conclusion. It seemed to me that we could resolve the question by trying to train people and giving them rules and talking to them about intuition and things like that, and that was the genesis. And nobody told me it was a great idea, but nobody wanted to tell me it was stupid either, so we did it

How long before the actual program started? Was this something that you reacted on very quickly and said, "Yeah, this is a great idea, let me do it." Or did it have to sink in for a while before you created the program?

Richard:  It was only a couple of months before we put the things in motion, like advertisements in newspapers, that lead to starting in January of '84. So, not such a long period of time after I thought of it.

Niels: Fantastic! I think that's a great story, and thanks for finally putting the record straight on this point

Niels: Now speaking about that, and maybe we come back to you Jerry, you've got (as far as I understand) very little training so to speak. Tell us a little bit about that, but also tell me, when you were taught these rules initially, whether this made sense to you the first time you heard it or did it take awhile before it made perfect sense?

Jerry:  Well, we got great training, sufficient, more than enough, so our training could not have been better. And on top of that we got a lot of time with Rich and Bill, and support - crazy support, which you don't get in the real world. So, what was the second part of your question?

In fact, these rules seem a little stifling.

Niels: No, I was just going to say, so you had this training which is it fair to say that it lasted two, three weeks?

Jerry:  Right, it lasted two to three weeks. Oh, I know! We did take some time where we could go up and have lunch with Rich and trade with Rich. Some of those opportunities were very beneficial because I could ask certain questions and start understanding more of the philosophy and what was going on with the trades and how to think about the trades and the market's systems.

So, that was our Trader for a Day with Rich, which was very important. I've said on other podcasts that it's so important, this sort of support we had in an environment that maybe we'll never have again, where if you're doing the right thing, that's going to be the bottom line on your performance or your evaluation of your performance versus, "Please make me some money, and I don't really care how you do it."

In fact, these rules seem a little stifling. You should probably use more flair for instance, which is a typical client. I've said before (it's a bad analogy), but it's kind of like saying that if you print the rules then people can follow them or they'll know some good rules but, "You won't be a marine by reading a manual." I think that we became much better traders because of time spent with Rich and Bill, and the way they ran the program was simply far beyond just a set of rules.Page Break

Richard:  I'd like to say this about the rules, in my old age I've come to believe that mediocre rules are better than good traders judgment. That's because one thing in this business that you need is persistence and it's almost impossible to be as persistent using judgment. Obviously, if you follow a system and do everything, you're being one hundred percent persistent. So, it's a part of rule orientation that's under appreciated.

Niels: Now if we just go back to the subject about what was taught back in 1984, I just want to ask all of you if you feel that now, some thirty years later, that this is grossly out of touch with the reality of how trading should be done because things do change; or at the same time, in life and in markets, a lot of things stay the same. Feel free to go first, any of you on this one.

…what's more of a problem is the lack of volatility

Richard:  Well good luck with that one. The markets have changed a lot. What works is changing and is a bit of a problem, but what's more of a problem is the lack of volatility. Volatility seems to me to have trailed off over the years intermittently. You know, I'd rather have the volatility back. I mean that's a variable you can't control, but I think that it's more important than adjusting the system, although adjusting the system is important too.

Niels: I mean maybe I should ask that to Brian and you Jerry, so applying sort of the raw Turtle rules in the year 2017, that would still work?

Brian:  Well I would say the basic philosophy hasn't changed. You're continuing to do research, finding robust systems, and that means systems with the least amount of parameters that tell you how to initiate, liquidate, or stay out of a trade. We're always looking to build systems that are based on momentum or based on range dependent discrete time frames where you're confirming that a trend is in place. So, you're always looking to capture directional price movement. Obviously, managing risk is paramount, so you manage risk from the trade size, you limit it in the markets and sectors that you trade.

We have a risk management concept that overlays the portfolio that's based on marginal utility. So, we're harvesting profits along the way which is very different than what we did learn in the original Turtle trading programs. We're still doing the same things, just a little bit differently than we used to.

Also, if you enjoyed this short insightful takeaway from a past episode of this show then you will love the free book I’m giving away right now....it’s called “The Many Flavors of Trend Following” and it includes some of my best insights on this perhaps the Most Dependable and Consistent, yet Often Overlooked Investment Strategy... Get your free copy here