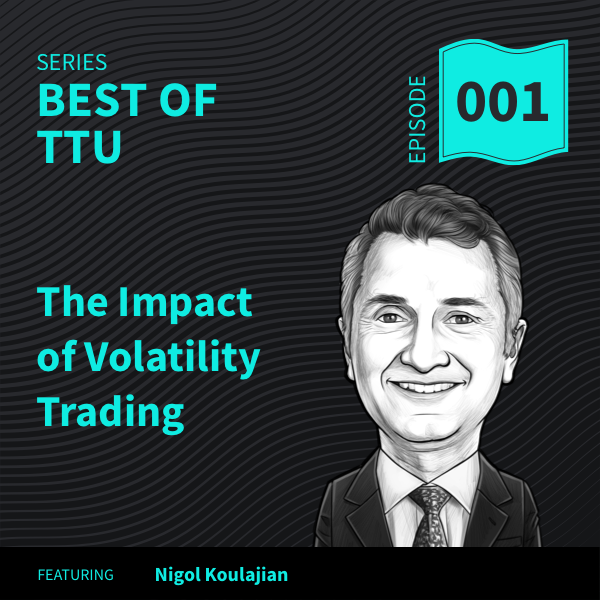 Best of TTU - The Impact of Volatility Trading

Kathryn Kaminski and I had the opportunity to sit down with Nigol Koulajian, the founder of Quest Partners, in which he shared his wealth of experience including life lessons and even his take on the modern scientific trading systems that are used today. One of topics which I particularly liked, and would like to share with you here, was his view on the VIX and Volatility trading within the managed futures industry and also outside of the industry. If you would like to listen to the full episode then you can do so by clicking here.

Nigol… “Certain investments that don’t have great risk-adjusted returns can temporarily turn into amazing bubbles because the return stream has certain characteristics which give time for other investors to come in. So it becomes very self-reinforcing like a positive feedback loop. There are ways, in certain industries, where you can reinforce that intentionally. If you’re an activist investor, you put on a position and then you say, “Here, I got my position,” and other people come in, you can do great. Effectively, it’s like a pump and dump of penny stocks in the eighties. Crypto currencies are a little bit similar. Traders receive text messages saying, “Buy this!” and “only this much for each account”.

"...it’s like a pump and dump of penny stocks in the eighties"

So, effectively these things are being a little bit manipulated. In the same way, regulators, if they don’t control these things, it can be very, very harmful for investors in the long-term. In the case of the VIX, starting from the Fed put, starting in 2009, which was when the market was not going to go down fifty percent anymore. It’s only going to go down twenty. Then you had equity hedge funds which said, “Since it’s going to go down only twenty then I’m going to buy at minus fifteen.” Then, because the minus fifteen is there, you have short-term swing traders who bought at minus ten. Then you had short-term CTAs who bought it at minus five, and then you had artificial intelligence or machine learning techniques who said buy it at minus three.

So, it’s become very self-reinforcing where effectively people are now justifying that the economy is doing great and that’s why the vol. is low. There’s an aspect of the reality that is that markets lead the economy and not the other way around.

Typically, that lasts until the options expire. So, look at the open interest in a market. What drove the implied vol. compression? With options of this maturity, that’s typically when you’re going to see the mean reversion of the market. Then it typically breaks out. So the VIX is quite a serious thing because a lot of, I’m going to say, very sophisticated investors are putting large amounts of money at play in it. Based on volatility and normalized risk techniques they think they’re taking very little risk. “

Niels: “ On that note, Nigol, you mentioned the word manipulation, there’s the VIX, you talked about big trades, and so on and so forth. But, I think there was an article in Bloomberg recently that mentions that on December 20th of last year, 2017, the “VIX elephant” put on a very large position - something like two hundred and sixty thousand lots. The article went on to talk about how relatively easy it is to manipulate the settlement, which has a huge impact if you’re trading options and you’re waiting for expiring, etc, etc. Do you have any thoughts about this? One of the things that our industry has always been known for is liquidity. We’re not manipulating markets. We’re not creating trends. We’re not doing anything like this. The VIX seems to be a little out of the ordinary when it comes to this.

Nigol: (Laughter) The VIX, by the way, in 2017 there was a six month period where the Sharpe Ratio was fifteen. On the Euro VIX, it was thirty. So, yes it’s a little bit out of the norm. I would say about one hundred times over.

I would say, in particular, it’s easy to manipulate the VIX. Today in an industry that, I would say, there’s potentially some misalignment of interests between the interest of hedge fund managers where they participate in the up side but not the downside towards year end. There could be quite strong incentives to make sure that the market stays where it needs to be for a good payout year-end. So effectively, if consciously we’re talking about risk being volatility based, and I say that my position is this (and I have a ten percent vol. and I’m going to keep a ten percent vol. and short the VIX), you’re going to create this bubble very, very easily in the VIX. You don’t need to do this on the VIX.

If you look at equities, if you look at fixed income over time, or the all-weather portfolio, or risk parity (where positions are inversely sized to, let’s say one year, three year, five year vol.), the fact that people are allocating to equities, and the vol. is coming down, they are constantly increasing their leverage and they are reinforcing that cycle. The leverage today, in a ten vol. risk parity product, is six to one, where, at a peak in 2007 it was four to one. In 2003 it was about four to one as well. Today, just the fact that people are chasing or saying, “We agree I’m going to put on ten percent vol.” “You don’t complain,” it’s stated.

Now I say do this: In the market, if I do it in a way that I’m timing my entries correctly, I can suck in a lot of quantitative traders in the process. I’m saying that, in the VIX, it’s very easy. Even in equities and fixed income you have the same thing going on. If you buy the S&P when the realized vol. is low, you typically lose money. If you buy when the realized vol. is high, you typically make money. Effectively you can use only volatility as a way to time the S&P or equity indices just because of the way that people are trading it and the way that people are sizing their positions.

Katy: Do you trade the VIX?

Nigol: We put on tiny positions, as I said, mainly for entertainment. So, we can extract convexity out of the market by trading delta one futures. We don’t need the VIX to get that. If we want the negative skew, we can generate negative skew by trading delta one as well. So, models that bottom pick the S&P have Sharpe Ratios of four and five in the last three years. Again, we provide those for free. You can get that convexity without trading the VIX. We trade it almost with a smile.

Interesting insights from one of the most successful short-term trading firms which I hope you found useful. If you want to check out the full conversation…just click here!

Also, if you enjoyed this short insightful takeaway from a past episode of this show then you will love the free book I’m giving away right now....it’s called “The Many Flavors of Trend Following” and it includes some of my best insights on this perhaps the Most Dependable and Consistent, yet Often Overlooked Investment Strategy...Get you free copy here

11 Top Traders Round Table with Michael Adam, David Harding, and Marty Lueck – 1of3

07 Top Traders Round Table with Richard Dennis, Brian Proctor, and Jerry Parker – 1of2

26 Top Traders Round Table with Daniel Crosby – 1of2

Get the most comprehensive guide to 200 of the BEST investment books, with insights, and learn from some of the wisest and most accomplished investors in the world. A collection of MUST READ books carefully selected for you. Get it now absolutely FREE!