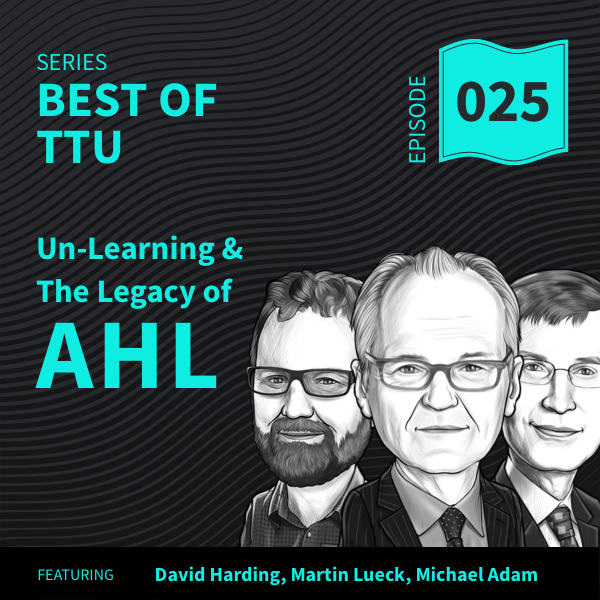 Best of TTU - Un-Learning & The Legacy of AHL

It has been said that: 'The biggest room of all, is the room for improvement', and one thing that is clear to see in the amazing careers of today’s guests, is the continued hunger for learning in the quest for an improved investment process. This has led to an unprecedented success for this trio.  Today, I share the last key insights from my conversation with Michael Adam, David Harding and Marty Lueck, also known as the founders of AHL.  In this post, we don’t just discuss the importance of learning... but also how you must un-learn certain things in order to move forward.  Lastly, we discuss what the three of them wish the legacy of AHL will be. Sit back and relax and enjoy these truly unique takeaways from my conversation with Michael, David and Marty and if you would like to listen to the full conversation, and I hope you do, just go to Top Traders Round Table Episode 13.

Niels: I think it was once said that, "The biggest room of all is the room for improvement." By this I mean, when I look at your achievements, I see a continuing hunger for learning. What about the flip side, you touched upon it earlier today about unlearning. Are there certain things you've found really important to unlearn in order to continue to improve your strategies? Were there things that you thought were really good only to realize that they were in fact flawed and much riskier than you thought?

Mike: That's probably a different view amongst the three of us. I remember, in the early days, David had an office where what he would do, he was surrounded by data, there literally was this much. His desk used to be a complete chaotic mess full of cuttings from the Wall Street Journal and bits of paper and notes. My desk was always completely clean. I thought that that was because I was more organized and focused than David, and he used to say to me, "Empty desk, empty mind."  I've always believed that one of the biggest challenges in systematic trading is not remembering what you know it's having the discipline to forget what you know because applying what you know to the next thing that you do is a very powerful hidden form of optimization. I think that building into research processes the organized capacity and insistence that people forget. Also, recruiting people who never worked in the field before, always, always, feeding people who aren't polluted by knowing stuff is really, really, important.

On the other hand it's very hard to develop systemic trading if you don't have a real feel for the way that markets work, so there's this constant battle, I think, between what insights you have, what wisdom you have on the one hand, and yet have the abilities to forget the specifics. I don't have an answer to that. I think it is extremely hard to do.

David: Yeah, I think what you said is spot on. Also, with the other people we've recruited, the struggle has been to get them to forget the efficient market theory. You need clever people with good mathematics and computer science. Typically you get them because they've passed degrees and took exams and so on and so forth. They've often been taught the efficient market theory which is a beguiling theory because the mathematics is appealing and difficult so it's something they can master.

The whole thing is always in need of constant care and attention. We spent an awful lot of time and money on improving the execution of what we do, and I think we got that to a really great place, and there's more that we can do.

Then having mastered that they believe it to be true, most of them - most people having mastered something difficult.I think education can crush creativity. It's interesting that Steve Jobs didn't actually get a degree, isn't it? He went off and did a smorgasbord of courses including, famously, calligraphy. I think, sadly, over educated people probably can know too much to be creative. Having said that, to be creative in a field obviously, you need to know about that field and have a lot of education. So that is the paradox Mike was referring to.

Marty: Back in the day, I think that the lesson that we learned early, quickly, and has stood us well, I think David you referred to the tendency to over optimize. I think we had some brilliant forays into the world of over optimization. We could make those simulations go from bottom left to top right like a rocket ship. (Laughter) Funnily enough, when you start trading it, the inflection point was so remarkable. So I think that was a lesson. We unlearned our desire to optimize pretty quickly.

David: What I find annoying... We're all being craggy old men. What I find annoying is I frequently see big companies putting out simulations that are over optimized in the same way that our simulations were over optimized 30 years ago. Big companies will put those things out and they will sell them to investors and that's sanctioned by the authorities. What used to be banned, which is marketing simulated track records, has now, apparently, become legal - you just call it an index. It's frustrating.

Mike: It is. Looking at the various moves that regulators have made in response to various crises. They shouldn't be annoying, but they are. When you watch regulators doing things where you can say, "Now that's really, really, stupid." They just willfully do it and it has exactly the result you predict. It is annoying.  Actually, the good news is that the world is apparently pretty good at forgetting given that it keeps making the same mistake again, and again, and again. So, in a way maybe we're better at forgetting than we think and maybe that isn't a bad thing in the end.

Marty, if you look at your own strategy and maybe David as well, what do you least like about it? What are the things that you would like to improve?

Marty: Gosh, interesting questions, Niels. The pat answer is, always be paranoid and always be paranoid about every part of it. You've heard me bang on about this before, is that any of these systematic methods or systematic investment strategies is only as weak as its weakest part. So you can't say, "Well, I'm looking for this fantastic new machine learning system that is always right, on tomorrow's trade"; A, as we just covered, you're unlikely to find that and you don't believe it if you do; and, B, how you put all those models together, how you risk manage it, how you execute it is crucial to having an overall efficacious system.

I'm not going to pinpoint one area of it that today I think is flawed. I think the whole thing is always in need of constant care and attention. We spent an awful lot of time and money on improving the execution of what we do and I think we got that to a really great place and I think that there's more that we can do. I think that the exchanges and instruments have moved on pace and we need to continue to invest and maybe turn the crosshairs more in that direction for awhile, but no single area, Niels. Everything needs to be improved.

It sounds a bit trite, but I'd repeat what Marty said which is that we are doing everything to try and make things better all the time, but it's a tough business.

Mike: I always thought that the major improvement we could have made in the business was to have no clients or employees. (Laughter)

I think it's testament that the Efficient Market Theory can be quite a bad model and that there's auto-correlation in markets, and that has very significant public policy implications, which I'm not sure the economics profession has absorbed.

Niels: I think it leads me nicely into my final, final, question and that is what is the legacy that you want people to think of when they think of AHL?

Mike: I would love it to be... because there's always this sort of sense in the world that everything has already been invented and there's nothing more to be done, and there's no opportunity or possibility, or something different. When we started out in AHL we absolutely challenged the orthodoxy and did something that we were told repeatedly by people who were far more experienced and knew far more than we did that not only was it not going to work but it couldn't work. I would like the thing that people should take from that going forward is that the future is history that has not yet been written.

There's always opportunity for someone to come in and say, "Hold on a minute. Here's something that no one has ever thought of before." It doesn't need to be complex and it doesn't need to be mathematically challenging. It can just be that someone just comes in from stage left and says, "What about this?" I'd like it to be an encouragement to challenge the orthodoxy and ignore your elders and those who consider themselves wiser - so basically, I'm saying ignore everything I say. (Laughter)

David:  Well, I think it's testament that the efficient market theory can be quite a bad model and that there's auto-correlation in markets and that has very significant public policy implications, which I'm not sure the economics profession has absorbed.

Mike:  The Economist has gone through a series, like a recovering alcoholic, over the years as one after the other it has trashed its own history. I only take the Economist so I can wait for them to, one by one, knock down their shibboleths. There's been a great thing about the world being anti-expert and how can we ignore economists? Well, in my view, the definition of an expert is someone who just occasionally is right. Of course, economists aren't experts. All the evidence points to that. I do hold some grudges!

Niels: Marty, what do you think about the legacy?

Marty: It's a great opportunity to get together with you both and I think, again, that unwittingly we were at the leading edge of something that became a big industry - with David, what you've done at Winton, and what Man Group have gone on to do, and Aspect, and many other members of the diaspora. Of course, we'd like to say it was all down to our genius, but that movement has created an investment management industry that employs hundreds if not thousands of people, that does really useful things for people's savings and pension funds, that backs deep science in universities around the country and around the world. That's part of the early legacy of AHL. 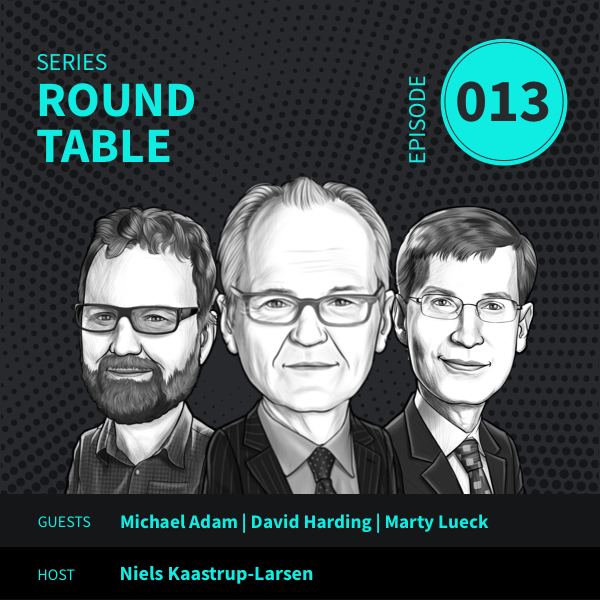 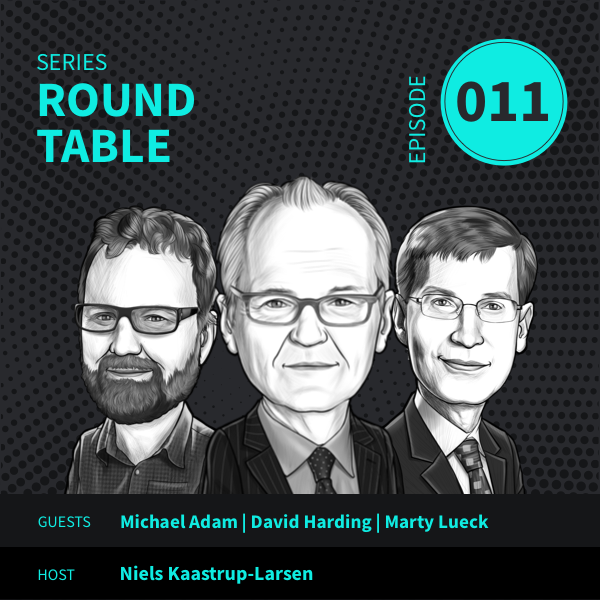 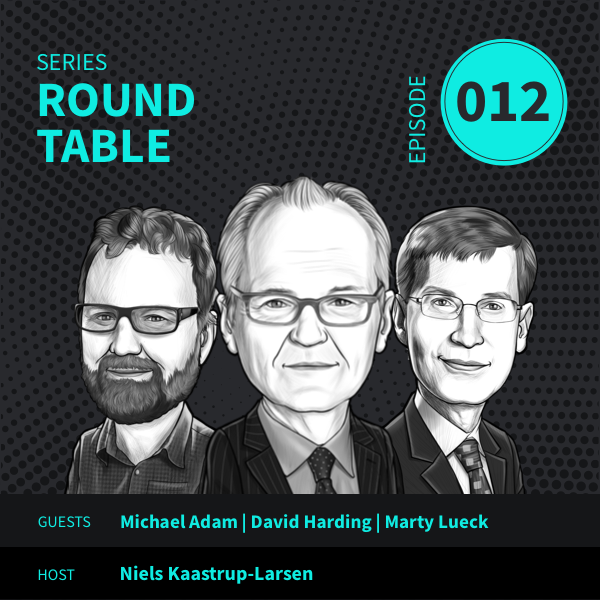